How I Got Started

Hunting is perceived and very much a male dominated industry, and while the female demographic is gaining steam, popularity, and “field cred” it is still vastly a “man’s world”. I didn’t grow up in a “die-hard” hunting home- my dad and brother would go out for a week during deer season every year, and I always knew I could join them, but it was never a family lifestyle. So how did I end up not only hunting, but running a hunting guide service?!?

Well, in a land far, far away, a land filled with camo and duck calls, a land where for 5 months a year a man could live on Busch Light and goose jerky, there was this little guide service called Flyway Outdoors and a guy named Chris Skrant, and this is where our story begins.

In 2014 I met Chris, we worked at the same company, and I HATED it! I only took the job for insurance (thanks Obama), it was a huge pay cut, the hours were awful, and I was bored out of my mind. Chris was the manager of another department and while I knew he was interested in me, I was interested in a different job, a job he was supposed to help me get. Well, through this, admittedly shallow, course of initial conversation I found out Chris owned a business. A hunting business… in Ohio? Guiding hunts?! Waterfowl hunts?!? In my limited hunting experience none of it made sense and in my overachieving brain the fact he owned a business and worked at, what I consider to be a root canal of a job, made even less sense.

Fast forward a few months and I found myself on our second date (he got lost on the way to our first date- I had to go find him… to this day he claims he saw geese). Our second date was a Ducks Unlimited banquet… So many warning signs!!! Why didn’t I run?!?… Anyways, they didn’t serve duck or wild game so it was going to be okay, right? Oh sure! It’s just dinner, silent auction, there might be puppies (I was in just to see the puppies- there were none), live auction, some drinks and mingling- no big deal, I got this. Let me tell you… I walked into what can only be described as dinner with the most misfit group of people: a reporter, Duck Dynasty-extra-wannabe’s, some very angry looking old men and girlfriends, Chris’s employees, and me. We left that night, no puppy, with a MASSIVE Duck’s Unlimited clock that Chris bought because I said it would look nice, that he paid way too much for and has not worked one day, but it was the beginning of the end.

Since that fateful second date I slowly started becoming more immersed in the lifestyle and business, many times this immersion included me kicking and screaming and around December every year divorce attorneys and “How to Get Away With Murder” becomes featured google searches and is found up-top on our Netflix queue… don’t judge me just because I’m honest! It started off with just “fixing” his business, it truly was a “seat of your pants” “wild, wild west” mentality, but my fixing was solely behind the computer, “I don’t hunt because I won’t kill something I won’t eat” was my mantra. Slowly, it turned into scouting, setting up fields, and PLANNING MY WEDDING AROUND HUNTING SEASON- ya know, the little things.

Fast forward 4 years from meeting Chris at the root canal-job, I am no longer solely behind the computer. I guide hunts, am a product ambassador for some fantastic companies, give seminars, manage properties, and have grown the business- our business. It has been a CRAZY 4 years with more ups and downs than a tele-novela, but here we are.

So, whether you are wanting to start your own business, change your lifestyle, or just feel a little alone in a world full of men and pink camo I’m here to tell you it doesn’t happen overnight and it will change your life, but you can do it. We want you here, the hunting industry wants you here, and I want you here. We all got started the same- by doing.

View all posts by: maskrant@gmail.com 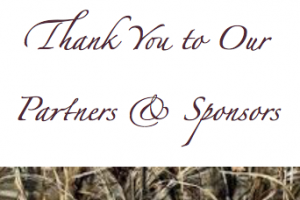